Chinese Measure Words for Animals That Kids Need to Know

In Chinese, learning nouns is not enough. The reason is simple: every noun in Chinese has to stick with a measure word. As there are more than a hundred measure words in Mandarin Chinese, the only way to learn them by heart is to memorize them. And it is always a good idea to learn the measure word together with the nouns.

What are Chinese Measure Words

In Chinese, measure words are called 量词. Similar to English, Chinese uses measure words for types of objects. So, for “a cup of water”, it is “一杯水“ in Chinese. However, measure words are used more than that. For example, “An apple” is “一个苹果” and “a book” is “一本书”, etc. Often there are sets of measure words used for certain groups of nouns. In this article, let’s have a look at the common Chinese measures words for animals. 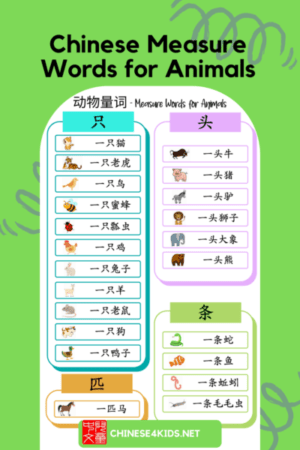 The animal words that go with 个 are listed below:

Note that the measure word 只 (zhī) is normally used with smaller animals. For larger animals (pigs, cows, or elephants, for example), 头 is used.

头 (tóu) refers to a head of something when used as a measure word. It is used for big animals such as livestock as well as wild animals.

条 (tiáo) is the measure word for things in a long, narrow shape – fish, snakes, for example.

There are some animals that can have two measure words.

Both are used with dogs. 只 is used in most cases, more often with dogs as pets. 条 is used more for the dogs with a slender shape, and most often wild. 只 implies an emotional attachment; 条 is more indifferent. So, both 一只狗 (yī zhī gǒu) and 一条狗 (is correct. 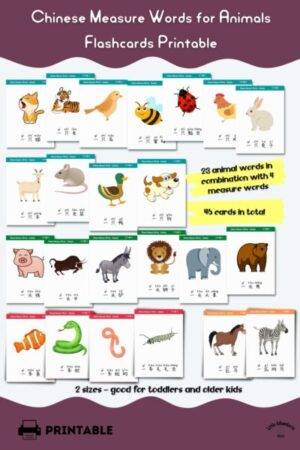 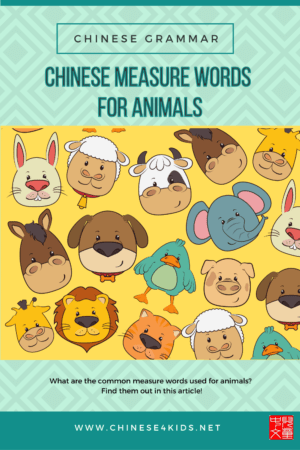