Home » Blog » Why Should Children Learn to Write Chinese Characters

Why Should Children Learn to Write Chinese Characters

First of all, let’s understand a misconception of Chinese alphabet.

Is there a “Chinese Alphabet”?

As we know, Chinese is symbol-based language. Written Chinese has no alphabet; it is instead a vast collection of characters with distinctive pronunciation. Unlike other phonetic languages in which the phonetic letters indicate the pronunciation of the word, Chinese characters do not give out hint of their pronunciation based on their parts.

[Tweet “Written Chinese has no alphabet; it is instead a vast collection of characters with distinctive [email protected]”]

The reason people believe there is Chinese alphabet is that there is a system in Chinese to provide hints to pronounce the characters. The system is called “Pinyin”. Pinyin was introduced to help learners to know how to pronounce correctly because it is hard to figure out the pronunciation of the Chinese characters just by looking at them. It is the official phonetic system for transcribing the Mandarin pronunciations of Chinese characters into the Latin alphabet.

However, Pinyin is not Chinese alphabet.

According to Wikipedia, “clusters of letters – initials (声母;聲母;shēngmǔ) and finals (韵母; 韻母;yùnmǔ) – and not consonant and vowel letters, form the fundamental elements in pinyin (and most other phonetic systems used to describe the Han language. Every Mandarin syllable can be spelled with exactly one initial followed by one final, except for the special syllableer or when atrailing -r is considered part of a syllable (see below).

As you can see it by yourself, Pinyin system looks like phonetic system, but it is not the same at all.

In learning spoken Chinese, Chinese words and phrases, Pinyin is extremely helpful in terms of getting to know the pronunciation. however, Pinyin was created to help people to master the pronunciation of the Chinese characters, but not to replace the Character learning itself.

One Chinese character normally does not form a word. In most cases, a Chinese word is composed by 2 or more characters. Pinyin represents the pronunciation of single characters, therefore it does not give the whole picture of the words.

When a learner reaches a certain Chinese level, pinyin actually can become confusing. There are only around 420 different syllables in Pinyin system, and there are more than 10,000 Chinese characters. Because each syllable in Chinese represents one character, these 420 syllables of pinyin actually represent the pronunciation of all the >10,000 characters in the entire Chinese language. As you can see, it is not sufficient to comprehend Chinese fully. Relying on Pinyin only creates confusion as one pronunciation may represent several characters and therefore several different meanings.

Take “ma” for example. “ma” can mean “Mother”, “linen”, “horse”, “to scold” and more. If you try to remember all the meanings in association of the single syllable, it is a mission impossible.

Believe it or not, children learn Chinese characters much faster than adults do. Children have the elephant’s memory and they haven’t learned to associate a language to one set of phonetic system yet. So for them, Chinese characters are like anything else they learn; they learn them naturally.

Like sight words in English, children can start to learn the simple and commonly used  characters. Recognizing the characters is the first goal; knowing how to write them is the next target. Once the child knows how to write the first 200-300 characters, writing is not a problem we need to worry about any longer. It is simply part of the Chinese learning experience and children accept it quite well.

Remember: the more Chinese characters children learn, the more enjoyment they get when they associate the characters with their meanings. From there the beauty of Chinese language can therefore be enjoyed and appreciated.

How should a child learn how to write Chinese characters?

There are certain rules in Chinese character structure. It is important to write a character following the right stroke order: in brief, from top to bottom, from left to right and from outside to inside.

Below is a brief introduction of stroke orders.

One Writing Worksheet for You to Start

Here is one writing worksheet for you to start the practice. In this worksheet, children can practice to write the following 10 characters: 人, 口, 大, 中, 小, 哭, 笑, 一, 上, 下. 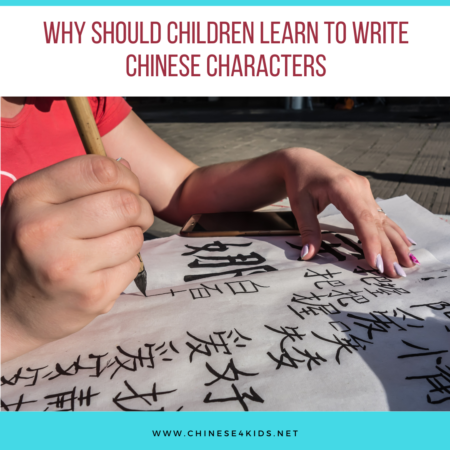 If you need Chinese characters with the right stroke orders to practice Chinese writing, you may like
CHINESE4KIDS 100 CHINESE CHARACTER WRITING WORKBOOK

PrevPreviousHow Much Do You Know About Duanwu Jie – Dragon Boat Festival?
NextSummer Chinese Learning for Kids with 3-Part Montessori FlashcardsNext